The last week of November sees the return of the Rockabilly music festival “Blues at Moonlight” to the Costa del Sol town of Benalmádena, from Thursday 24th to Sunday 27th November inclusive.

Rockabilly is one of the first musical sub-genres to emerge from rock and roll in the United States in the 1950s, and has now spread all over the world.

The venue for the festival is the Moonlight Room of the Sunset Beach Club Hotel in Benalmádena Costa. This is the fourteenth edition of the festival taking place there.

There will also be some activities in the Oasis Restaurant of the hotel, such as DJ sets (the disc jockeys play vinyl records, mostly original 7″ 45 rpm singles) and some acoustic concerts at midday and a Buddy Holly tribute concert on Friday afternoon and a blues swing concert on Saturday afternoon.

The names of the acts and where they will perform are as follows:

The festival is open to all hotel guests and visitors at midday in the Oasis Restaurant, and in the mid-afternoon it goes on until the early hours of the morning in the Moonlight Room (where you can only get in with a ticket). 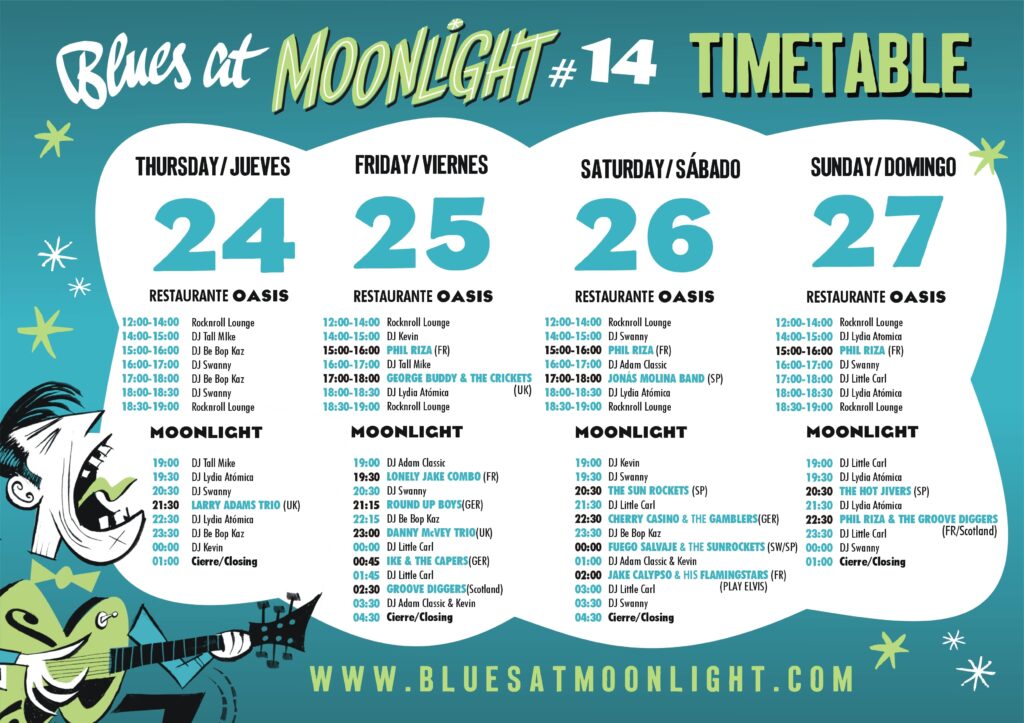 All the details of prices and online sales are available on the website www.bluesatmoonlight.com, as well as accommodation and other information about the festival.

It is worth mentioning the presence of the Rock and Roll band from Berlin (Germany) CHERRY CASINO & THE GAMBLERS, which is the first time they come to our festival and in which there are great expectations for their perfect recreation of the sound of the 50s of that kind of bands with guitar / vocals, saxophone, double bass and drums.

We will also have the privilege of the presentation of their latest album with El Dandy Re-cords “Baby C’mon Let’s Go” (pictured right).

The album will be on sale at the festival and on the website www.bluesatmoonlight.com.

Over the last year, the record label El Dandy Records, which runs parallel to the festival and releases references of bands that perform or have performed at the festival, has been consolidating, already presenting 19 songs and 6 artists: Jake Calypso & His Red Hot, Carlos & The Bandidos, Danny McVey Trio, Cherry Casino & The Gamblers, Jonás Molina Band and Frank Harvey, as well as several projects in progress that will be ready for 2.023.

Also noteworthy is the return of one of the emblematic groups of our festival, the Almeria-based THE SUN ROCKETS, who on this occasion will take to the Moonlight stage with their original line-up made up of Diego Cruz (vocals and drums), Chipo (guitar) and Pepe Lee (double bass). FUEGO SALVAJE will also be accompanied by Jan Svensson, Swedish rockabilly artist, who has a long career in the best stages of the genre, being the leader of legendary bands such as WILDFIRE WILLIE & THE RAM- BLERS, THE HI-WINDERS, THE ORBITUNES among others. He has been an idol in the rockabilly and rock and roll circuits of the 50s from the 90s until now.

We also have the privilege of having the trio from Madrid JONAS MOLINA BAND that will entertain the evening at Bar Salitos, free of charge and at the festival’s expense to bring his style of Blues-Swing guitar to all attendees who wish to enjoy his performance. On this occasion we will also have the privilege of presenting his new album of 5 songs “WIGGLE THE WIG” with his own songs, where in addition to his facet as a guitarist we will see him leading the band as a singer also with a clean and precise sound for lovers of the purest blues, swing, shuffle of the 1950s/1960s.

Finally, we will have as every year a merchandising stand at the entrance of the Moonlight hall where you can buy festival t-shirts, records and some rockabilly clothes.